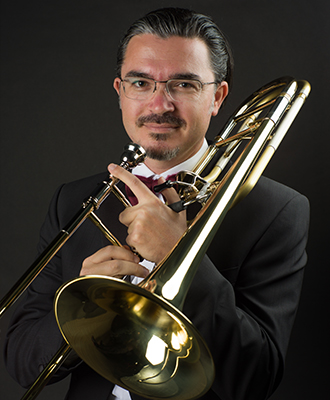 Born in Plovdiv, Bulgaria. Dimo at the age of 13 was accepted into Kostadin Takov’s trombone class at the “Dobrin Petkov” National School of Music and Dance.

In 2002, after five years of studies, he graduated with excellence. During this period Dimo Pishtyalov participated and was a laureate of many national and international music competitions in Bulgaria and abroad.

His further studies took him to the University of the Arts in Bern, Switzerland, where he was accepted into Professor Branimir Slokar’s trombone class. While in Bern, Dimo Pishtyalov also had the chance and took part in some of the major international music competitions for trombone.

In 2004 he was a laureate at the Prague Spring Trombone Competition in Prague, Czech Republic. Along with his studies with Professor Slokar and Dimo Pishtyalov, he has also had the opportunity to participate in master classes given by Timofei Dokschitzer, Professor Denis Wick, Professor Ian Bousflied, Professor Jonas Bylund, and Joseph Alessi. In 2006 Dimo Pishtyalov completed successfully his Bachelor Degree (Orchesterdiplom) and in 2009 his Master degree (Solistendiplom) .

In August 2008, Dimo Pishtyalov moved to Doha, State of Qatar to join the Qatar Philharmonic Orchestra as Principal trombone.