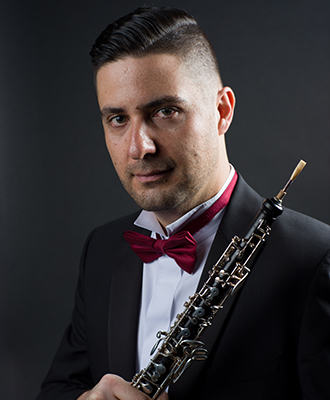 Santa Cruz de Tenerife, 1986. He started his music studies at the age of 8, at the “Professional Conservatory” of Tenerife, He later joined the “Reina Sofia College of Music” in Madrid under the tutoring of Professor Hansjörg Schellenberger and Víctor Anchel, being awarded as best student in 2009.

In the same year, Germán Díaz moved to Munich after joining the academy of the Bavarian Radio Symphony Orchestra, where he had lessons with Stefan Schilli and Ramon Ortega; and he played under the baton of conductors such as David Zinman, Mariss Jansons, Bernard Haitink, Sir Colin David and Andris Nelsons on tours in Europe and Asia.

Díaz Blanco has collaborated as principal oboist with many orchestras such as: Seoul Philharmonic, Musikcollegium Winterthur, Royal Scottish National Orchestra, Bach Collegium München, Camerata Salzburg, and Symphony Orchestra of Tenerife (where he was invited to perform as soloist the oboe concerto from B. A. Zimmerman).

Since 2014, Diaz Blanco is the principal oboe of the Qatar Philharmonic Orchestra, invited to perform Strauss oboe concerto in October 2017.