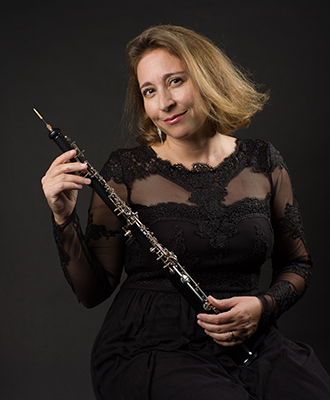 Claire was born in London, UK and moved to Cape Town, SA at the age of 5. At 6, she began piano lessons and later started oboe lessons aged 10, at the ‘Beau Soleil’ music centre with Sharon Fligner-Lindquist. She was a prize-winner in national music competitions such as the ATKV (woodwind prize) and Hugenot competition (1st prize).

In 1998, Claire moved back to London and continued her studies at the Royal College of Music where she was awarded a full international scholarship from the ABRSM to study oboe with John Anderson and piano with Neil Immelman and John Byrne. Claire was also a recipient of the Ernest Oppenheimer Musical Trust award.

In her first year at the RCM, Claire was awarded the ‘Manilow’ prize. In her second year, she completed an ‘Erasmus’ exchange in Oslo studying under Erik Niord Larsen. Upon graduating at the RCM in 2002 with a B Mus (Hons), Claire decided to continue postgraduate studies in Munich, Germany with Francois Leleux at the ‘Richard Strauss Konservatorium’ and later at the ‘Hochschule fuer Musik und Theater’. She was awarded her ‘Meisterklasse’ diploma in 2006.

From 2005-2006, she completed a ‘Praktikum’ with the BR radio orchestra. In 2006, Claire began in the ‘Mozarteum’ orchestra in Salzburg as 2nd oboe/English horn and switched to the same position in 2008 as a founding member of the Qatar Philharmonic Orchestra where she has been based ever since.