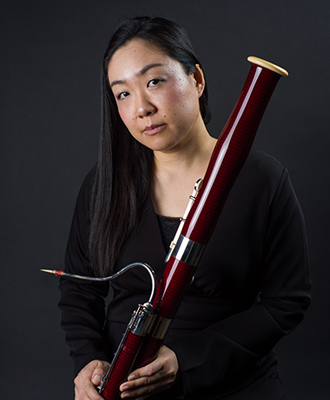 Yoshiko Koyama, born in 1979 in Kawasaki (Japan), started to take piano lessons at the age of 4. At 15, she shifted to Bassoon, which she was studying at the Senzoku College of Music with Mr. Atsushi Ishii.

In summer 2001 she was admitted to the class of Professor Akio Koyama (with whom she is not related) at the Conservatoire of Trossingen (Germany). After she has graduated there with great success, she moved to Mannheim to study with Professor Ole Kristian T. Dahl at the Conservatoire and finished her studies in 2008.

Besides her studies Ms.Koyama has played Bassoon in various Orchestras in Germany such as the Münster Theatre, the Kurpfälzisches Kammerorchestra, the National Theater Mannheim, the Theatre Heidelberg, and the Philharmonic Orchestra of Rheinland-Pfalz.

Since 2008, she is a member of the Qatar Philharmonic Orchestra.