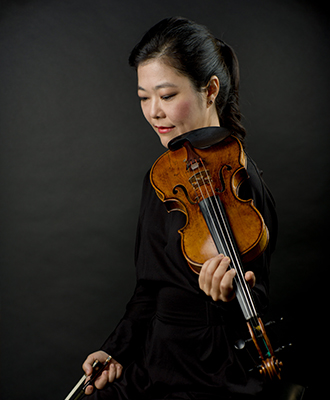 Taehyun Kim has been awarded the Chamber Music Prize of Freunde Junger Musiker in Germany, the Friedrich Jürgen Sellheim Society in Germany, the Annemarie and Hermann Rauhe Award for Contemporary Chamber Music Hamburg, and the scholarship by the Live Music Now, established by Yehudi Menuhin in Vienna and Hannover.

She has received important musical influences from Hatto Beyerle, Michael Frischenschlager, Walter Levin, Menahem Pressler, Mstislav Rostropowitsch, and Niklas Schmidt among others. Taehyun Kim has been invited to appear in numerous concerts and international music festivals in many European countries, Australia, Brazil and Korea, and has performed in the world’s most prestigious venues including the Wiener Musikverein, Wiener Konzerthaus, Konzerthaus Berlin, Seoul Arts Center, Sejong Arts Center, Sala São Paulo and many others.

Her performances have been broadcasted by KBS, NDR, RBB, NRK and ABC. Since 2008, Taehyun Kim is a member of Qatar Philharmonic Orchestra and a faculty member of Qatar Music Academy since 2012.