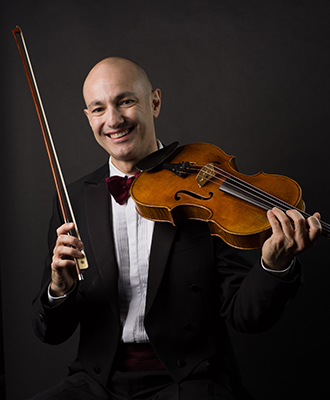 Giovanni grew up in Rome and Sardinia, Italy, surrounded by a family of musicians. He graduated from the CNSM de Lyon under J. Ph. Vasseur, and subsequently terminated his post-graduate studies in Maastricht, in the class of the celebrated virtuoso Michail Kugel.

During his study years he has been a member of both the Italian and the European Union Youth Orchestra, and met with several artists who shaped his musical growth, such as Piero Farulli, Carlo Pozzi, Tabea Zimmermann, Gidon Kremer, Atar Arad, Fabrice Pierre.

Since 2014 he is the Principal Viola of the Qatar Philharmonic Orchestra. This is the latest of a series of appointments he won during a twenty-years long successful orchestra career.

Previously he has been Principal Viola of the Verdi Orchestra in Milan, Cagliari and Trieste’s Opera Houses, the Malaysian Philharmonic, the Orquestra Sînfonica do Estado de São Paulo and the West Australian Symphony Orchestra.

Giovanni is often sought after as guest principal by accomplished orchestras around the world, such as the BBC Philharmonic (Manchester), BBC Wales (Cardiff), RAI National Italian Radio Orchestra, and the Opera de Lyon among others.

He also appeared as a soloist in Italy, Brazil, Asia and Middle East, under the baton of, among others, Vittorio Parisi, Mathias Bamert, Paul Daniel, and Yan Pascal Tortelier. Parallel to his career as an instrumentalist, he has been devoting himself since 2010 to the art of orchestra conducting, obtaining his European Master under the guidance of Mº George Pehlivanian at the Katarina Gurska Foundation in Madrid in 2018.

Previously a viola professor at the University of Western Australia, Giovanni now teaches at the Qatar Music Academy and has given masterclasses in the conservatories of Maastricht, Shanghai, Singapore and the ANAM in Melbourne. In Doha, he is the conductor of the Qatar Youth Orchestra, the Qatar Concert Choir, and regularly conducts the Cinemoon Ensemble, member of the Qatar Philharmonic.