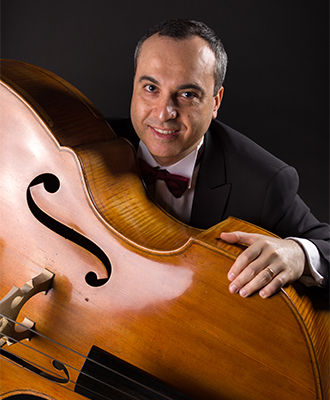 Born in 1979, Matteo Gaspari started studying music at the age of 8. Firstly, he learnt Piano, then Accordion and eventually Double Bass.

He graduated at the Conservatory of music in Pescara (Italy) with Professor Giancarlo De Frenza and afterwards he moved to Germany to study with Professor Wolfgang Güttler at the Hochschule für Musik in Karlsruhe. There, before graduating, he was member of the Double Bass ensemble “Geatles”.

During the study in Germany he had joined various Orchestras, having the possibility to play with great and famous conductors such as Lorin Maazel, Peter Eötvös, Heinz Holliger, Sylvain Cambreling, and Dimitri Kitayenko.

Matteo is a founding-member of the Qatar Philharmonic Orchestra. He is a Section Bass Player since 2008.