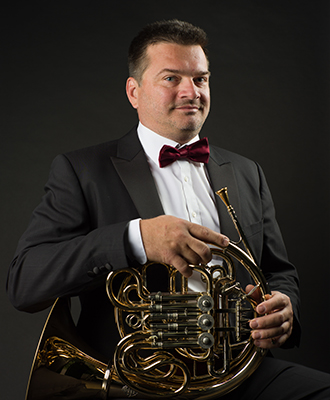 A native of Hungary, Peter has music running in his veins, and during his childhood his mother was concertmaster and father trombone player in the local symphony orchestra. This rich ancestry led to him starting to play the horn at the age of 10 at the local music school in Nyíregyháza.

Between 1987 and 1991, Peter attended the Zoltan Kodaly Conservatory of Music in Debrecen, culminating in him winning the National Horn Competition of Conservatories. He was subsequently invited to study at Ferenc Liszt Academy of Music in Budapest under Professor Adam Friedrich.

Peter’s career took off in 1992 with a stint as principal horn player of the Hungarian State Opera Orchestra, working with renowned maestros such as Janos Kovacs, Lamberto Gardelli, Yuri Simonov, Erik Bergel and Rico Saccani.

During this time, in 1996, Peter won first prize in the International Horn Society’s Horn Competition. His horizon then broadened in 1998, after he was appointed section leader principal horn in the Malaysian Philharmonic Orchestra.

In 2003, he also became a part time principal horn at the Budapest Festival Orchestra, led by Ivan Fischer. He has been featured on numerous CD and radio recordings. After Malaysia, Peter returned to his homeland to play with the acclaimed Budapest Festival Orchestra, until his wanderlust again returned, resulting in him joining the newly established Qatar Philharmonic Orchestra as principal horn in 2008.