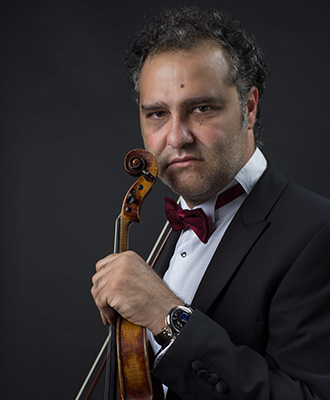 Maias is considered as one of the foremost Arab artists of today. The award-winning Violinist has performed as soloist and improviser all over the world with such leading musicians as Yo-Yo Ma, Daniel Barenboim, Gidon Kremer. He has done projects with Vienna Symphony Orchestra, Kremerata Baltica, Radio Symphony Orchestra Vienna; Orchestra Royal de Chamber de Wallonie, Vienna Kamerata, Deutsche Kammer Philharmonie.

Together with composer Dana Alfardan, Maias produced the Onboard music of Qatar Airways, Lusail Stadium Launching-Music of World Cup 2022 among many others. He has successfully built a large following whilst popularizing classical music in the Arab world through his own compositions. Maias is a prolific recording artist and has released over 20 of his albums commercially.

In 2006, Maias established a flexible music group “MAqam Ensemble” in Vienna, specializing in Arabic classical music. Since its inception, the ensemble had enjoyed tremendous success in Europe and the Middle-East with over 350 hundred concerts. www.maqamensemble.com

Overseen by Winton Marsalis and collaborating with Dominick Farinacci, Maias has curated “Arabic Nights at Jazz at Lincoln Centre Doha” in 2014 and 15, presenting Arabic music fusions to new audiences. In 2017, Maias established MAjazz Band, specializing in Arabic Jazz/World Music. MAjazz performed in top venues such as Glocken in Bremen, Porgy & Bess in Vienna, and European Jazz Festival in Doha. www.majazzband.com

Maias graduated from Higher Institute of Music in Damascus in 2004, and earned his Master’s Degree at the Vienna University of Music in 2010. In addition to performing his original music, Maias performs modern oriental music compositions, and is considered as one of the top experts in this field. Maias is a regular invitee as a lecturer in Arabic music performing art by conservatories and music universities in Germany, France, Austria, Norway, Italy , Sweden, Lithuania, Belgium, Amsterdam, Russia among others.

In 2020, Maias started “MAestro”, an online-program on social media to speak and analyse music for Arabic Audience; “MAestro” has over 5 million views since April 2020.