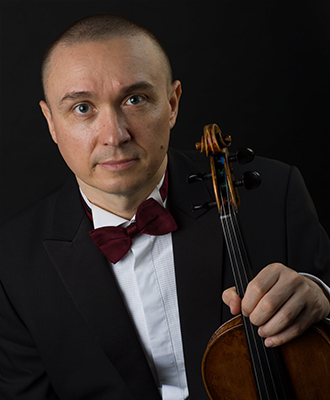 Vitalii Pervushyn was born in Nemyriv, Ukraine, Vinnitsya Oblast on the 3rd of June 1974. From 1980 to 1988, Vitalii was enrolled in a Nemiryv Children’s Music School in a violin class and studying with the teacher Lerman L.N.

From 1989 to 1992, Vitali was enrolled in Vinnytsa Music College studying violin with teacher Kalinovskiy N.S.. During his study in the musical college, Vitalii took part in Republic competitions and received a multitude of certificates for his extraordinary performances. He also took part in the program, “New Name Of Ukraine”.

From 1992 to 1997, Vitali was enrolled in the Petro Tchaikovsky National Music Academy of Ukraine, learning violin with Professor Kotorovich B.A. and Docent Ushkov V.A..

From 1997 to the year 2000, Vitalii also completed his graduate degree on solo performance and teaching with Professor Kotorovich B.A. in Petro Tchaikovsky National Music Academy of Ukraine.

From 1993 to 2000, Vitali worked as Co-Principal in the National Symphony Orchestra Of Ukraine and Chamber Orchestra of Kiev Soloists. In the year 2000, Vitalii won the 2nd Grand Prix and scholarship of Davidov competition in Kiev and received the position of Co-Principal in the “Philharmonie Der Nationen” in Germany with the conductor Justus Frantz. While working in this orchestra he played all over the world in the best concert halls with musicians such as Yuri Bashmet, Victor Tretyakov, Vadim Repin, Gidon Kremer, Maxim Vengerov, Peter Zimmermann and many more.

In 2008, Vitalii won a competition in Moscow and received the position of Sub-Principal in Qatar Philharmonic Orchestra and is working there to this day. During the 12 years of him being a part of Qatar Philharmonic Orchestra, Vitalii received a multitude of diplomas from Qatar Foundation expressing their gratitude for his professionalism and dedication at the workplace.