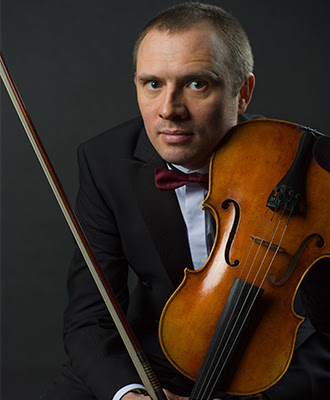 Victor Sumenkov was born in Novosibirsk, Russia. At the age of 4 he started having violin classes in the Primary Music School No. 8. Then 3 years later he was accepted to the Specialized Music School, which he graduated in 1997.

He had been part of the school’s Chamber Orchestra for several years and performed as a viola group leader in Russia and around the world. In 1997, he was accepted to the Novosibirsk State Conservatory named after Mikhail Ivanovich Glinka and became a viola student of Professor Yury Mazchenko.

In 2001, he received his Bachelor’s Degree and subsequently Master’s Degree of Music a year later. During his study he won the 1st Prize and Grand Prix in both regional and international string instrument competitions, while being part of the Conservatory String Quartet and Novosibirsk Academic State Symphony Orchestra under Maestro Arnold Mikhailovich Katz.

In 2002, he was accepted to the Cologne High School of Music (with Professor Matthias Buchholz). During his study in Germany, Victor had been having temporary contracts as a viola player with the Guerzenich Orchestra Köln as well as Bochumer Symphoniker. In 2008, he was offered a permanent contract with the Qatar Philharmonic Orchestra as Viola Sub-Principal and is honoured and pleased to be part of the QPO to this day.