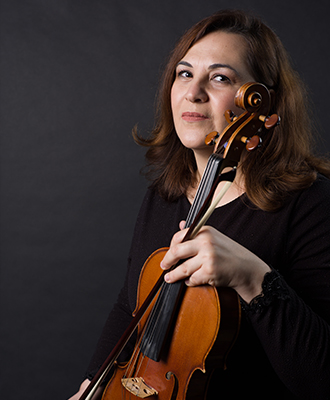 Born in 1977, Merve’s natural aptitude for music got discovered by her parents at a young age. In 1988, she enrolled at Istanbul State Conservatory to begin her viola education.

Under a special law for exceptionally gifted students, she graduated from the university of the same school; both by skipping a year and being top of Selçuk Kundakçı’s viola class.

Throughout her education in Turkey, she received many scholarships and awards from both domestic and foreign organizations such as Turkish Education Foundation scholarship, a masterclass in Sermonetta, Italy with Professor Bruno Giuranna that was funded by Istanbul Philharmonics Foundation. A masterclass in Professor Thomas Riebl’s class at Salzburg Mozarteum Academy, which was funded by Austrian Government and she was also chosen as “Young Musician of the Year”, performing solo concerts which are accompanied by Istanbul State Philharmonic Orchestra and recital in International Istanbul Festival.

After enrolling in Music College at Cologne, Germany in 1998, Merve Kenet Bulun graduated from Professor Matthias Buchholz’s course program and received her master’s degree in 2001. She began to work with the West German Radio and Television Orchestra (West Deutsche Rundfunk, Koeln) in the same year of her graduation and
continued to participate in their recordings for the following decade until she arrived at Qatar.

Furthermore, besides working as both a tutti and a solo viola player between years 2004-2007 at the Bergische Symphoniker in Remscheid in Germany. She actively toured as chamber musician both domestically and internationally with a Quartet and Sinfonietta Koeln; a chamber music orchestra, which allowed her to meet and interact with a myriad of different cultures.

After entering and passing Qatar Philharmonic Orchestra’s entrance exam – which has been conducted throughout the globe – from Germany, she got accepted and moved to Qatar. Besides her work in the orchestra, the artist also leads of “CineMoon Ensemble”, a chamber music ensemble that has been founded by her in 2014. Since its foundation, CineMoon has participated in many successful projects such as, Ajyal Film Festival 2019, Special Anime Concerts , Film Music Concerts, Embassy Concerts , Collaborations with Qatar Concert Choir and various children concerts.

Being a very versatile artist, Merve Kenet Bulun wrote and produced “Yasmin, the Camel, and the Orchestra”, a puppet play and concert for kids, with supports of the Qatar Philharmonic Orchestra. Upon the success of the play, the Qatar Philharmonic asked for another work from her, and the artist wrote the musical story telling , “Mozart, A Musical Sitcom”, designing the 18th-century costumes of the play herself.

The artist is also interested in archaeology, general and art history as well as designing costumes, tiles, writing animee scenarios that explain classical music pieces, painting, drawing illustrations, travelling, and cooking as a mother of two.