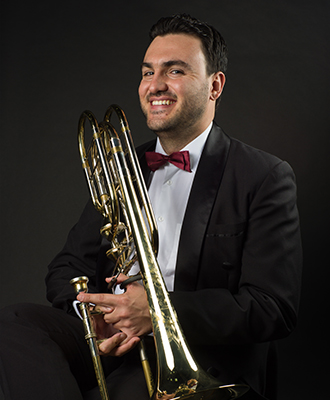 Colombian Bass Trombone player of the Qatar Philharmonic Orchestra. Sebastian obtained the second place in the International Trombone Competition held in Budapest, Hungary. During the 2017-2018 season he was Bass Trombone of the Zürich Philharmonia (Zürich Opera Orchestra), and he also collaborated with the Zürich Kammerorchester (Zürich Chamber Orchestra).

Among other orchestras he has collaborated with are the Mariinsky Orchestra from Saint Petersburg, Orquesta Sinfónica Provincial de Santa Fe (Argentina), and Statkapelle Halle (Germany). He has represented Colombia in the YOA (Youth orchestra of the Americas) and the international academy Teatro del Lago in Chile.

Sebastian was the first Colombian trombonist to be invited to offer a recital during the International Trombone Festival (ITF), held in the city of Muncie, Indiana in July 2019. He is working on his first record production with works by Colombian composers.