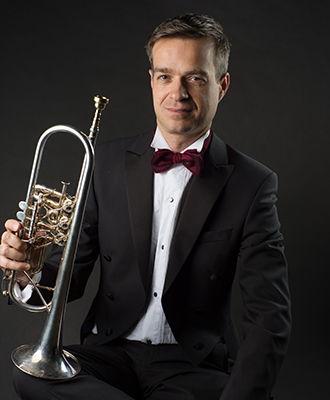 Born in Lier, Belgium. Joris studied at the Royal Conservatory in Antwerp both piano and trumpet. He then completed his studies at the Hochschule für Musik und Darstellende Kunst in Frankfurt am Main, where he obtained his Masters in music with the highest distinction in 2006.

After his studies, Joris Laenen was engaged at the same college as a teacher of orchestral studies. As a performing orchestral musician, before joining the Qatar Philharmonic Orchestra, he has performed worldwide with the Antwerp Symphony Orchestra, European Union Youth Orchestra, and many others.

He had a permanent contract with the Frankfurt Opera as a principal trumpet player from 2006 until 2007. In 2004, he won the prestigious Yamaha International Trumpet Contest in Berlin, and in 2005 the second prize at the Lions Club Trumpet Competition in Brussels.

As a pianist, he founded together with some other members of the Qatar Philharmonic Orchestra, the international ensemble Emoción, for which he also writes the arrangements and his original compositions.

They made their US debut in the summer of 2019 at the world-famous Jazz at Lincoln Center in New York.