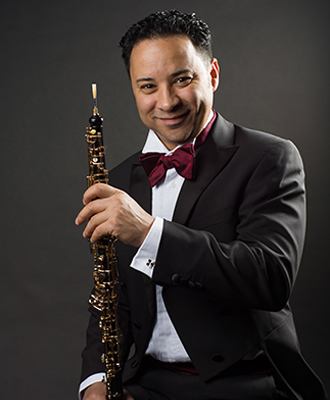 Mohamed Saleh started his oboe studies at age 12 and won his first solo position in the Cairo Opera Orchestra at age 17.

During his conservatory studies, he won first prize at The Egyptian Ministry of Culture Oboe Competition (1994) and first prize at the  Satellite Musical competition for Woodwinds (1995). Shortly after, he received his Bachelor’s of Music and Oboe performance from the Cairo Conservatory under Professor E. Kocinski.

In 2004, Mohamed won a scholarship to continue his musical studies in Chicago, USA. There, he studied under Alex Klein and received his Master’s of Oboe Performance from Roosevelt  University. Other studies followed in Rostock College of Music and Theatre in Rostock, Germany, where he received his Artist Diploma (Konzert Exam) in Oboe Performance, Orchestral, and Chamber Music studies in 2006. There he studied under Professor G. Witt.

He later went on to receive his Doctorate of Arts and Oboe Performance in 2007 from the Cairo Academy of Arts. Throughout his career, Mohamed has performed with numerous professional orchestras and has appeared as soloist with the following ensembles: Cairo Opera Orchestra, Ikhnaton Chamber Orchestra, Heidelberg Sinfoniker, Die Norddeutsche Philharmonie Rostock, Bavarian Radio Symphony Orchestra, Philharmonic of The Nations, Etihad Symphony Orchestra, and the West-Eastern Divan Orchestra, where he was a founding member in 1999 under Maestro Daniel Barenboim.

In his free time, Mohamed enjoys playing other woodwind instruments, including Saxophone and Duduk.