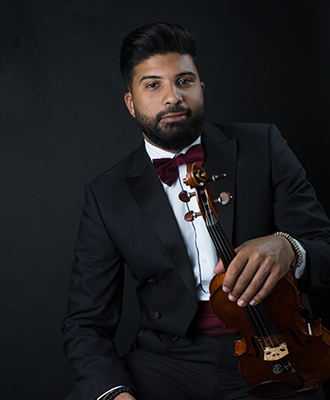 Mohamed Oweda is a violinist and music producer. He was Born in 1991 in Cairo, where he is from an artistic family as he is the son of the late Egyptian composer Abd El-Azim Oweda . At the age of 7, he joined The Higher Institute of Music – Cairo Conservatory – where he began studying the violin with Professor Ahmed Ramzy, and then continued his studies with Professor Hassan Sharara.

In 2012, Mohamed graduated from the Cairo Conservatory with an Excellence with Honours Bachelor degree. In 2003, Oweda won the first prize and the award of the best player at his age in the Middle East at Sharjah’s Cultural Forum in the United Arab Emirates. Also, he has obtained an appreciation certificate for his participation at the Festival of Queen Noor Al Hussein in the Kingdom of Jordan in 2004 .

Mohamed was also associate principal 2nd violin with the Cairo Opera Orchestra from 2012-2013, Al Andalusia Orchestra – the seconded orchestra of the West-Eastern Divan Orchestra – as a Concertmaster under the baton of maestro Daniel Barenboim in 2010. Then with the West-Eastern Divan Orchestra as an associate principal 2nd violin from 2011 till now. In his Solo career, Mohamed performed with the Cairo Conservatory Chamber Orchestra and the Egyptian Philharmonic Society Chamber Orchestra for several times.

As for his contributions in chamber music and solo recitals, Mohamed performed many concerts in Cairo Opera House, Al Goumhoreia Theatre – Cairo, Cairo Conservatory Institute, Russian Cultural Center in Cairo, Sayed Darwish Theatre in Alexandria, and the Center of Creativity Arts in Alexandria, and other venues.

He also participated in the events of the Finnish-Egyptian Cultural Bridge in Cairo in 2011, performing with Ralf Gothoni – the Finnish Conductor – and his son Mark Gothoni the violin professor. In 2013, Oweda has been granted a Scholarship from the French Institute in Cairo to continue his studies in France, where he Studied for one year at Conservatoire de Lyon with Professor Françis Duroy and got his Perfectionnement 4ème cycle certificate in 2014.

Nowadays, Mohamed is a member of the Qatar Philharmonic Orchestra, 2nd violins group, since January 2015.