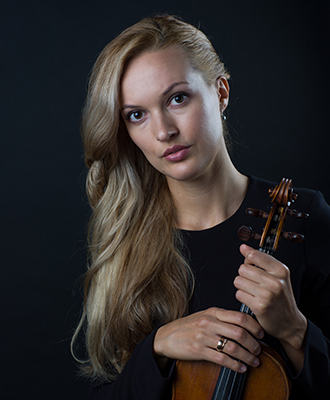 Egle Valute was born in 1991, in Klaipeda city, Lithuania. At the age of 6, she began her violin studies with teacher-methodist Kristina Kupsiene at Eduardas Balsys Gymnasium of Arts in Klaipeda city. In 2018, she graduated with Master’s degree in Violin Performance and Violin Pedagogy studying with Professor Christian Altenburger at University for Music and Performing Arts in Vienna.

She has also taken part in various master classes with Professors: Zakhar Bron, Petru Munteanu, Christian Altenburger, Galina Turchaninova, Marianne Piketty, and Coosje Wijzenbeek. In the years 2008, 2009 and 2014, she was a scholar of Mstislav Rostropovich, Haus Marteau and SYLFF Tokyo Foundations. In July 2015, Egle was invited to participate as a guest member on a tour with chamber orchestra “Kremerata Baltica” founded and directed by violinist Gidon Kremer.

Since 2015, Egle has become a member of Qatar Philharmonic Orchestra.