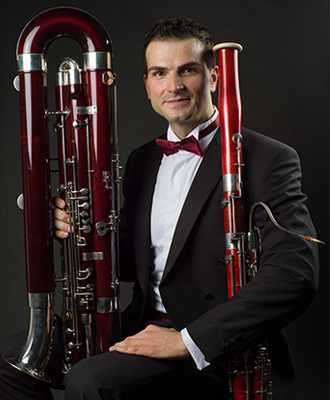 Miroslav Stoyanov was born in the city of Sofa, Bulgaria. Since childhood he has shown interest in and he has devoted himself to music, taking piano and solfeggio courses in his musical school. In 2001 he graduated from “Lyubomir Pipkov” National School of Music – Sofia, bassoon major, with course tutor Professor Petar Kotsev. Mr. Stoyanov has actively participated in festivals, competitions and master classes, playing first bassoonist in a number of orchestras.

In 2007, Miroslav completes with Honours the higher musical education program of Hochschule für Musik in Lucerne – Switzerland – studying bassoon with Professor Beat Blättler and contrabassoon with Professor Markus Boppart. From 2003 – 2004, he is the first bassoonist in “Music Europe” Orchestra – Italy, performing concerts in Israel, Italy, the USA. In 2006, Miroslav won the highest award at “Jmanuel und Evamaria Schenk Stiftung” competition – Switzerland. In 2006 he plays as a practitioner in Lucerne Symphonic Orchestra – KKL – in Switzerland.

Since 2008 Stoyanov has been a member of Qatar Philharmonic Orchestra in Doha. In addition to the music he is fond of the sports and cars.