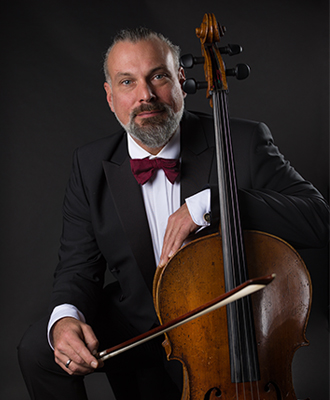 Born and raised for the first 15 years of his life in Venezuela, “KIKO” Christoph Schmitz began cello lessons aged 6.

In 2000, he entered the Berlin “Hanns Eisler” University of Music to study under Professor Jens-Peter-Mainz. Parallel to his cello studies he became a member of the ARCANDO string quartet and studied with the ensemble under Professor Eberhard Feltz, during which time he had the opportunity to work and perform with some well-known international chamber groups such as The Alban Berg Quartett, Vogler Quartett, Isaye Quartett, Shostakowitsch Quartett, Aditti Quartett and Rosamunde Quartett.

His playing has been recognised with the award of several Foundations and Scholarships, including the prestigious Freiherr Bruno von Schröder-Stiftung (Germany), Dom-Stiftung (Switzerland) and Yehudi Menuhin Stiftung “live-music-now”.

In 2008, having been a substitution member of the Brandenburgisches Staatsorchester (Frankfurt/Oder) Kammerphilharmonie Amade and Deutsches Symphonie-Orchester Berlin, he moved to Doha to join the Qatar Philharmonic Orchestra, where he has been a permanent member since. Alongside his orchestra work, he is a founding member of the Doha String Quartet, with whom he has performed across the Middle East, and the band, Emoción, through which he enjoys being able to express his passion for his Latin roots and the South American culture.

Kiko’s work has seen him perform worldwide, including with the London Metropolitan Orchestra in the international debut concert of Qatar’s preeminent composer, Dana Al Fardan, at London’s Theatre Royal Haymarket in 2017, at the Rio Olympics, London’s Royal Albert Hall in the world-famous Proms festival, and at New York’s iconic Lincoln Center.

He has performed in concerts and festivals from Germany to Russia, China and Japan. KIKO has enjoyed his role as narrator in several children’s concerts the QPO has performed, including Peter and The Wolf, and has been a passionate cello teacher since 2008, joining the teaching staff at the highly regarded Qatar Music Academy in 2017, where he is one of the most in-demand cello tutors to his beloved students.

KIKO is proud to be currently playing a French Augustinus Chappuy Violoncello crafted in 1761.