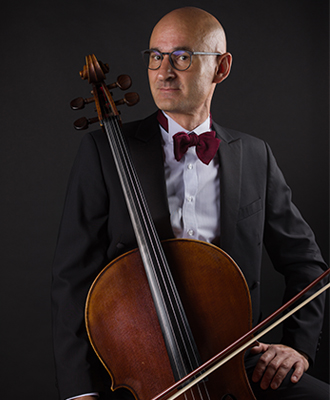 Harald Georgi, born in Germany, studied at the famous universities of music ‘Carl Maria von Weber’ in Dresden and ‘Hanns Eisler’ in Berlin with Michael Ameln and Michael Sanderling.

Additional to his studies he already started playing in different German orchestras, volunteering with Rundfunk-Sinfonie-Orchester Berlin, Berliner Symphoniker, later with Staatstheater Kassel und Staatstheater Saarbrücken. He holds the position of sub-principal at Anhaltische Philharmonie Dessau for about 7 years, before he accepted the position of cello tutti at the newly founded Qatar Philharmonie Orchestra in the year 2008.

Beside his work as an orchestra musician he enjoys playing chamber music, as well concerts as soloist, with Philharmonisches Orchester Bad Reichenhall (Gemany, 2002, 2003) and Sinfonietta Bardou (France, 2015).

Harald Georgi also teaches the cello at music schools in Germany, and since 2014 at Qatar Music Academy. As couch of the string section he likes to share his music passion and orchestra experiences to a new generation of students, at Sinfonietta Bardou (France) and at Qatar Youth Orchestra (Qatar Music Academy).