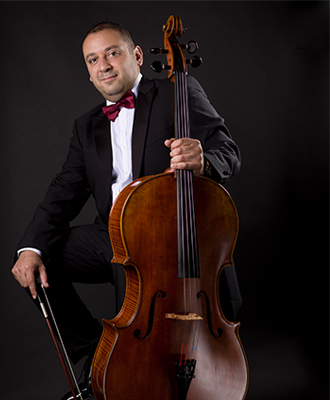 Born in Cairo in 1980, Hassan began to study cello at the age of 9 at the Cairo Conservatory with Professor Ayman El-Hanbouly. Determined to master the instrument, he grew up to be a professional musician. He graduated in 2001 with excellent degrees.

From the early stage, Hassan won several local prizes, among them the first prize at the Arab Radio and TV competition in 1994. At the Rostropovich International Cello Competition in Paris, he won the special appreciation of the competition patron, a world famous Russian cellist.

He attended several cello master classes such as the International Rostropovich Workshop in Baku 1998, Yo-Yo Ma in Weimar, Germany 1999, the Spanish cellist Lluís Claret 1995, 1996 and 1998, the Brazilian cellist Enrico Kanerow and Lynn Harrell in Lübeck, Germany 2000.

As a principal cellist he participated in the international UBS Verbier orchestra in 2006. Then he was invited several times to play as a member of the Verbier UBS Chamber Orchestra, working with many renowned conductors and musicians such as J. Livien, L. Slatkin, Y. Bashmet, Gatti, and M. Misky. In 2007, he took part in the Salzburg Festival playing new compositions of one of the most influential artists of our time, the French conductor and composer of contemporary classical music, Pierre Boulez.

In 2009, Hassan was invited to play the same composition but as a soloist, a great opportunity to work intensively and closely with Pierre Boulez. Hassan’s performance as a soloist during the Solo concert tour of the West-Eastern Divan Orchestra (2008), when he played Haydn Sinfonia Concertante for 4 solo instruments violin, cello, oboe and bassoon under Daniel Barenboim, brought him wide acclaim.

On the occasion of the 85th Birthday of Pierre Boulez (2010), Hassan played the solo violoncello of Boulez Messagesquisse for solo cello and 6 violoncelli of the West-Eastern Diwan Orchestra under Barenboim in one of his most significant solo concerts. His concert only cover a majority of international cello pieces, but he is also very well known for his mastering of the classical Arab music repertoires. He participated in many Arab music festivals and worked closely with the most famous Arab singers and composers. He also did a lot of recordings of many songs and music tracks of famous movies.

Since 2008, Hassan joined the Qatar Philharmonic Orchestra (QPO) as a co-principal cellist. Besides his mastering of the cello, Hassan has proven his skills in playing the Rababa, a Persian-Arab instrument dated back to the 8th century and considered to be the mother of all string instruments. In the first concerto for Rababa and Orchestra of Marcel Khalife, which premiere was on the occasion of celebrating the Qatar National Day Dec. 2011, Hassan played the solo of Rababa under the conductor Thomas Kalb and knew how to dazzle the audience with a solo performance of fascinating brilliance.