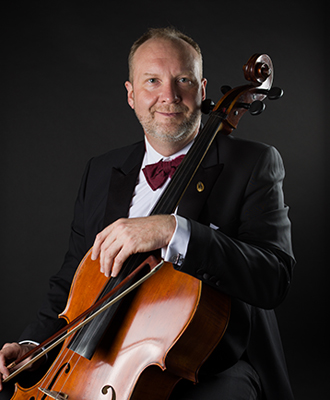 Kirill Bogatyrev began his music studies with Emmanuel Fishman in Saint-Petersburg at the age of 5, and later continued for 11 years at the Music Lyceum of Saint-Petersburg – the famous school for exceptional talents and prodigy children.

Then Mr. Bogatyrev graduated with distinction with a Master’s Degree in Cello and Chamber Music from the St. Petersburg Conservatory, where his professors were S. Slovachevsky, S. Roldugin and A. Dogadin.

From 1992 to 1993, Mr. Bogatyrev started his orchestral carrier as a principal cellist with the Capella Symphony Orchestra. From 1994 to 1999, he was a member of the Mariinsky-Kirov Orchestra under the direction of Valery Gergiev. From 1999 to 2001, he continued as a principal cellist of the Amazonas Philharmonic in Manaus, Brazil, and from 2001 to 2008 he was the leader of the cello section of the Sao Paulo State Symphony Orchestra (OSESP).

Along with being a founding member of the string quartet Quarteto Romanov, Mr. Bogatyrev was cello professor at the USP – University of Sao-Paulo in Rebeirao Preto, and in the Sao Paulo Municipal Music Academy.

Since 2008, he has been co-principal cellist of the Qatar Philharmonic Orchestra. In 2019, he participated in CD recording with violinist Reto Kuppel, Marcus Bosch and QPO.

Mr. Bogatyrev plays a cello made by Euginio Prezza, Italy 1993.