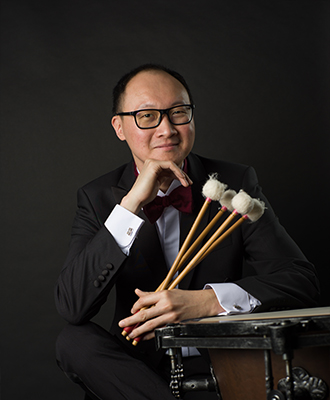 Born in 1980, Ng’s musical interest began with the popular music scene as a guitarist, keyboard player and songwriter. Ng’s vision, interest and experience in music broadened as he gained orchestral expertise from his hometown Penang Symphony before progressing to the Malaysian National Symphony as Principal Timpanist. During this time, he was also a member of the Asian Youth Orchestra, Commonwealth Youth Orchestra and Jeunesses Musicales World Orchestra.

In 2000, he proudly received his ATCL Diploma for Piano. By this time, and for the next year, Mr Ng studied timpani and percussion with Paul Philbert and Gerald Novak (Malaysian Philharmonic Orchestra). From here, he furthered his study at Richard Strauss Konservatorium in Munich with Adel Shalaby for a year.

Under the tutelage of Torsten Schönfeld and Dominic Oelze (Staatsoper Berlin), Mathias Müller (Gewandhausorchester Leipzig), and Edith Salmen, Ng received both Diploma and Konzertexamen degrees for Percussion at the Hochschule für Musik und Theater in Rostock, where he was awarded the Horst-Rahe-Stiftung scholarship for 4 consecutive years.

Before he participated in the world famous ARD Competition in Munich, he won the Gasteig Soloist Competition (2002) with prize winners’ concert recorded by Bayerischer Rundfunk radio station, and Hochschulwettbewerb for Duo and Trio (2006) in Germany. A series of quartet concerts (2 pianos and 2 percussion) were performed including a debut at Konzerthaus Berlin.

Thereafter he focused on a year of apprenticeship with Nürnberger Sinfoniker, substitute in various orchestras in Germany, teaching, CD recordings, solo recitals, concerto soloist with orchestras before he joined the newly founded Qatar Philharmonic in 2008. Over the years, Qatar Philharmonic has had concert tours in various continents as an ambassador from Qatar.