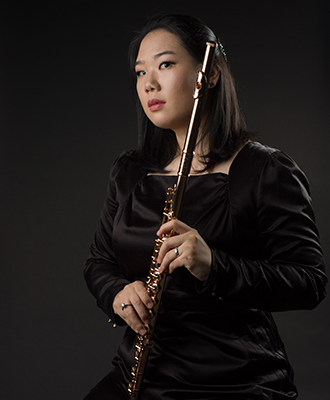 Flutist Jihoon Shin was born in 1987 in Seoul, South Korea. At age 11, she started playing the flute and already in her age of 12, she won major junior music competitions in Korea such as ‘Chosun daily newspaper music competition’ and ‘Music Journal Competition’.

After her graduation at Yale University, she entered SUNY Stony Brook to pursue her Doctorate degree in Musical Arts with professor Carol Wincenc, but because of her recent winning position at the Orchestra Accademia del Teatro alla Scala in Italy, she moved back to Europe in 2012.

In 2006, she was selected as Villa Musica Ensemble member in Germany and participated actively until 2008. In 2013, she got the second flute position in Qatar Philharmonic Orchestra. Ever since then she was invited numerous times as guest principal flutist at Seoul Philharmonic and Swedish Radio Symphony Orchestra.

Ms. Shin is also playing a volunteer recitals every summer for Gangwon province children who live at the location where it is hard to get any cultural advantage. During her time at Yale University, she taught New Haven Public School students in Music in Schools Program of Yale School of Music. She was also invited as a main faculty member of Yale Morse Summer Music Camp in the summer of 2010 and 2011. In 2014 and 2015, she was invited as a faculty member of Falaut Campus and launched her first CD with Falaut.

Other than this, she was invited for Masterclass and Recital in Nazarje, Slovenia and Tenerife, Spain in 2015-2016. Ms. Shin was also one of the main scholarship student of Gang-won province government in Korea from 2003-2013.

Currently Ms. Shin is a flute player at Qatar Philharmonic Orchestra, and she teaches masterclasses around the world and plays many concerts as a soloist as well as a chamber musician.