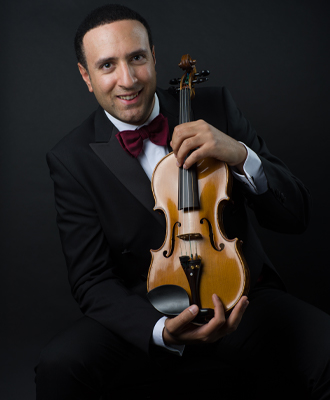 Born in Cairo in 1981. Islam Elhefnawy joined Cairo Conservatory at the age of 6 and studied violin with Professor Irakly Beridze and Professor Hassan Sharara.

– In 2001: Graduated from Cairo Conservatory (Excellent with honor)

– In 2010: Masters Degree (Excellent with honor) in Musical Arts (violin)

– In 2017: PHD Degree (Excellent with honor) in Musical Arts (violin) from Cairo Conservatory.

 The concertmaster of Egyptian Philharmonic Society Orchestra in Cairo

– In 1997: Wieniawsky and Lipinski International violin Competition in Poland.

– Had a master class in Germany with Professor Lucas David in 1996 and Professor Wolfgang Marschner in 1997.

– Participated in several concerts and tours: