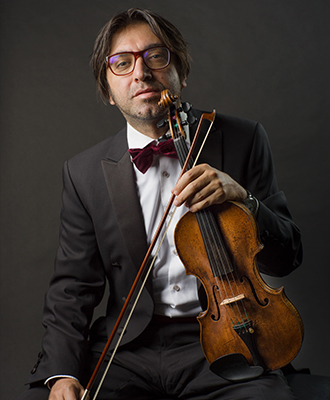 Born in 1979, in Zekrit- Lebanon, Georges Yammine took his first violin lesson at the age of 14 in the Lebanese National Conservatory in Beirut with Professor Michel Kheirallah. Six years later, in 1999, he received a scholarship from the West Eastern Divan project and the Barenboim-Said Foundation to study in Germany at the “Franz Liszt Hochschule” in Weimar with Professor Friedemann Eichhorn, and in Berlin with Mathis Fischer.

He completed his studies in 2003 with an Artistic Diploma in Violin, then moved to Paris where he studied for two years and received his Golden Medal in Chamber Music from Conservatoire of Montreuil. Since 1999, Georges Yammine is a member of the West Eastern Divan Orchestra directed by Maestro Daniel Barenboim. And since 2008, he is a member of the Qatar Philharmonic Orchestra.

In addition to his musical performances around the world, he has established an international career as a Fine Art Photographer and exhibited his work in Qatar, USA, Germany, Switzerland and Australia. In 2014, he published his first book: “Funkelnde Hoffnung”, (A Spark of Hope).