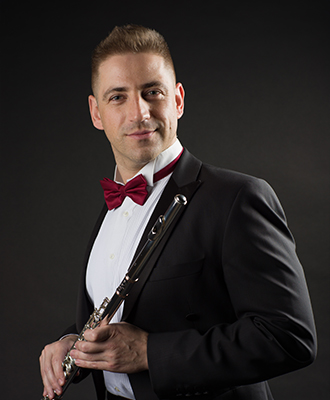 Most notably, Mr. Haskin won the prestigious Young Concert Artist International Audition in New York in 2009 as one of the ten flutists in the world who won the honor in over 50 years.

Born in Minsk, Belarus, Mr. Haskin received his education from the Moscow Tchaikovsky Conservatory in Russia and from the Yale University School of Music in USA. Since 2008, he has served as the Co-Principal flutist of Qatar Philharmonic Orchestra. During 2007-2008, Mr. Haskin was solo piccoloist of the Bolshoi Theatre Orchestra in Moscow.

He was also principal flutist of the Moscow Conservatory Symphony Orchestra under the baton of Gennady Rozhdestvensky.

Mr. Haskin made his highly acclaimed solo debut at the Kennedy Center for Performing Arts in 2011. He has appeared in solo and chamber concerts at the Merkin Hall in New York, Nexus Concert Hall in Tokyo, Forbidden City Concert Hall in Beijing, among others.

Alongside his orchestral and solo career, Mr. Haskin taught at Qatar Music Academy and American School of Doha. He regularly conducts master classes and open coaching in some of the most renowned institutions in the U.S., including the New England Conservatory, Mannes School of Music, Carnegie-Mellon University, Colburn School and the University of Southern California.

He is a frequent faculty-in-residence and clinician at music festivals and summer camps in the U.S. and Europe. He has been invited as guest artist in Italy, Luxembourg, China, Taiwan, Spain, Russia, Belarus, Iran and the United Arab Emirates, as well as to adjudicate flute competitions in both Russia and China.

In August 2017, he was invited to perform duet with renowned American flutist and journalist Eugenia Zukerman at the Kennedy Center for Performing Arts. Recently, he appeared as soloist with the Qatar Philharmonic Orchestra performing the Concerto for Flute by the critically-claimed Juilliard Composer Behzad Ranjbaran, who enthusiastically praised Haskin’s “superb interpretation, beautiful tone, brilliant technique and a deep understanding of the concerto”.

Mr. Haskin is a proud Burkart Artist and Representative.