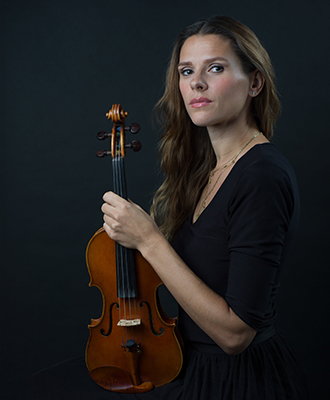 Anne-Cathrin Ehrlich is one of the founding members of the Qatar Philharmonic Orchestra. Born in Zwickau-Germany, she began her musical journey at the age of 5 playing the violin in the Robert Schumann Conservatory.
Already at this very young age her great love for the Orchestra and music was undeniable. After winning several competitions, Anne joined the State Youth Orchestra of Saxony. By the year 2000 she held the principal position of Second Violins. By 14 years of age Anne joined the Special Music College in Dresden a prestigious college for only selected, exceptionally talented young Musicians. She later on attained her Masters in the Franz Liszt Music Academy in Weimar with the highly esteemed violinist and Prof of music; Matthias Wollong. Throughout Anne’s time at University she was invited to travel and perform with Master class musicians worldwide, including performances in America with the brilliant Julia Fischer and Jeffrey Multer from The Juilliard School of Music in New York City. Post-graduation, Anne accepted her first fixed term position in Jena Philharmonic Orchestra in Germany. Shortly after auditioning successfully for The Qatar Philharmonic Orchestra and moving to Qatar to start a new chapter of her life. Anne currently resides in Qatar with her husband and two children. Qatar has been home for the past 13 years and alongside her career with Qatar Philharmonic Orchestra Anne is a gifted and committed teacher of music as well as being the co-founder of the highly successful Female String ensemble Al Jamal.