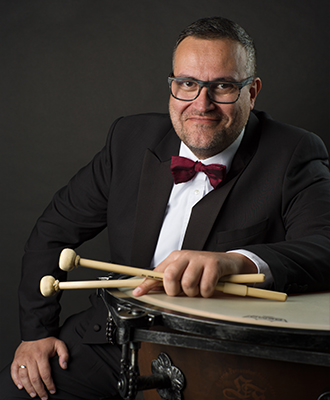 Alexander Kamenarov received his first piano lesson at the age of 5 and his first percussion lesson at age of 7. At a very early age he showed his musical talent during numerous solo performances with the best orchestras of Bulgaria, such as the Orchestra of the Bulgarian National Broadcasting Company.

Alexander completed his music education with two master’s degrees from the National Music Academy Pantcho Vladigerov (Professor and Doctor Tatiana Karparova) in Sofia, Bulgaria, and the Mozarteum University in Salzburg, Austria, where he had the chance to work with one of the most outstanding percussionists of our time, Professor and Dr. Peter Sadlo.

In 2016, he also received a doctorate of Musicology and Musical Art from the National Academy of Music in Sofia.

He is the founding member of the Via Nova Percussion Group, with whom he won first prize at the most prestigious percussion competition in Luxembourg in 2005, IPCL.

In 2009-2010, Alexander Kamenarov was invited as a guest lecturer at the National Music Academy Pantcho Vladigerov, where he taught for the first time in Bulgaria, “History, interpretation and stylistic in the Austrian classical music from XVIII, XIX and XX century, performed on Viennese timpani, Snare Drum and Mallet Instruments. He has given workshops and master classes in Bulgaria, Germany, Austria, Japan, Hong Kong and China, and was a jury member at the International Competition for Percussion Instruments Pendim in Plovdiv, Bulgaria (2005, 2007 and 2009) and at the Percussion Festival Hong Kong (2007).

Since 2008, he has been a member of the Austrian society of authors, composers, and music publishers (AKM).