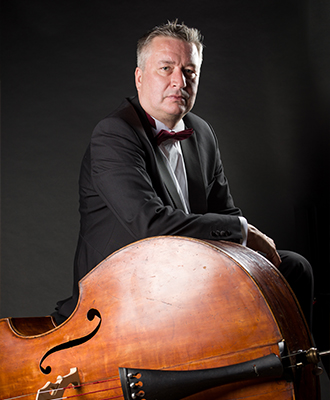 Born in Prague, Czech Republic. Radovan studied at the Prague Conservatory with Zdenek Benda and Kvetoslav Borovicka, and at the Academy of Music with Jiri Hudec, as well as in master classes of chamber music, at the Prague Mozart Academy in 1993 with Maurice Bourge, Boris Pergamenschikow, Sandor Vegh, Radovan Vlatkovic and others.

He won prizes at the international double-bass competitions, in Brno, Czech Republic in 1998 and Markneukirchen, Germany in 1999. In 2000, his solo performances of the Vanhal concerto with the Brno Philharmonic Orchestra and the Czechoslovakian Chamber Orchestra were broadcast by Czech Radio.

In years 1996-2008, he was a member of the Czech Nonet, renowned chamber music ensemble. With this ensemble Radovan Hetsch played many chamber music concerts and tours in USA, Canada, Great Britain, France, Germany, Austria, Switzerland, Spain and others, as well he recorded several CD recordings with this group.

Since 2008, he is a member of a new philharmonic orchestra in the middle East, the Qatar Philharmonic Orchestra (QPO) in Doha, Qatar. In summer 2010, Radovan Hetsch spent one month in Castleton, Virginia, USA under the baton of famous conductor Lorin Maazel. In January 2011, he played in Abu Dhabi with maestro Valery Gergiev and the World Orchestra for Peace.