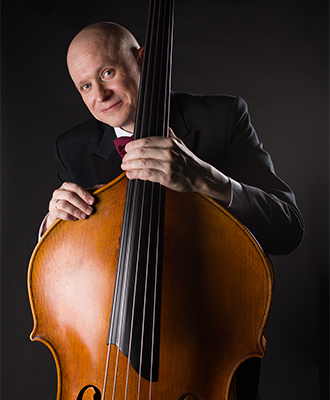 Gennady Krutikov was born in 1970 in Moscow, Russia. He started to play Cello at the age of 7 and switched to Double Bass when he was 16 years old. Gennady Krutikov studied at the Tchaikovsky Academic Music College in Moscow (1985-89) under Mikhail Kekshoev and at the Moscow State Conservatory (1989-94) under Professor Lev Rakov.

In 1995, Gennady received the Second prize of the 1st International Serge Koussevitzky Double Bass Competition in Moscow. From 1994 till 2018, he worked in the Russian National Orchestra (RNO) under the baton of the world-known conductor and pianist Mikhail Pletnev. Gennady had performed as Associated Principal Bass for 15 years, since 2003.

Gennady participated in the recording of more than 70 CDs of Russian National Orchestra by Deutsche Grammophon and Pentatone. Among them there are all the symphonies of Rachmaninov, Tchaikovsky, Beethoven, Shostakovich, works by Rimsky-Korsakov, Taneyev, Glazunov, Scriabin, as well as the Grammy Award-2003 recording “Peter and the Wolf” by Prokofiev.

Gennady has been playing in the Qatar Philharmonic Orchestra since February 2019.