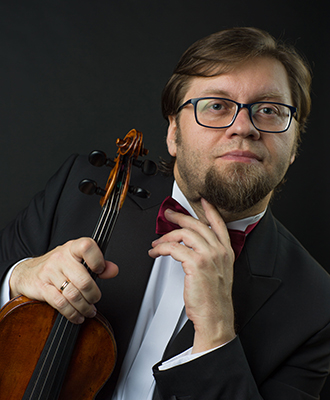 Born in a family of musicians in 1973 Lviv, Ukraine. His first public performance took place in Lviv with the Lviv Philharmonic Orchestra in 1986, was performed Symphony Espagnole by E. Lalo. From 1991 to 1996 he studied in the class of Professor L. Shutko (assistant of D. Oistrakh in Moscow).

In 1992, Pavlo gained II prise in First International Violin competition named after M. Lysenko (Kiev, Ukraine). Between 1992 to 1996 he received special scholarship from the President of Ukraine. From 1999-2001 he lived and worked in Switzerland and took master-classes from Ana Chumachenko, Professor of Munich High School, Pierre Amoyale, Professor of Lausanne Music High School, and Mr. Viktor Tretiakov, and received the best recommendations.

Over the years he has extensively been playing solo as well as in accompaniment with different orchestras and chamber music with colleagues-musicians. Pavlo has numerous recordings from SDR – Freiburg, Germany, SAT-1 Warsaw, Poland, and National TV and Radio of Ukraine.