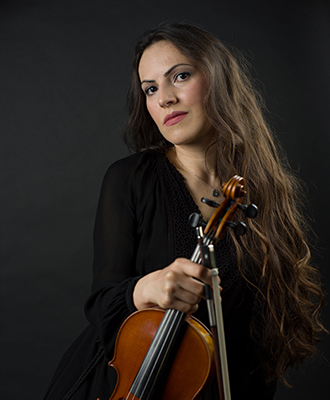 Motivated by a lifelong fascination for Islamic philosophy and culture, Lorena Manescu joined QPO since it’s founding in 2008, after graduating with distinction from the prestigious Vienna Conservatory. Born in 1986, in Romania, she spent her early childhood in a mountain village, Polovragi, with her grandparents Maria and Marin Chiritescu, renowned preservers and teachers of traditional music.

Inspired by their enthusiasm for folklore, Lorena started to play the violin at the age of 5 under the tutorship of her grandfather. She then attended the primary and secondary music school in the town of her birth, Ramnicu-Valcea, afterwards joined Dinu Lipatti boarding high-school for music in Bucharest.

Lorena was granted a scholarship by the Vienna Conservatory where she studied with highly acclaimed professors. She won many prizes and awards at national and international competitions, performed concerts and recitals on some of the most prestigious stages around the world (Royal Albert Hall-London, Konzerthaus, and Musikverein-Vienna, Teatro alla Scala-Milan, Gasteig- Munich, Kennedy Center-Washington D.C, United Nations-New York, etc.), and appeared as a soloist with several orchestras, and participated in numerous TV and radio broadcasts, and has been involved in numerous recordings (one of which is the Qatar Airways boarding soundtrack).

Lorena is very fond of QPO and it’s distinguished musicians, and considers it as her second larger family. Within QPO, she is also an active chamber music player, as a member of Doha String Quartet and founding member of CineMoon ensemble. Besides being a passionate orchestral, chamber music and solo performer, Lorena is a devoted educator. Since 2010 she teaches violin at Qatar Music Academy.