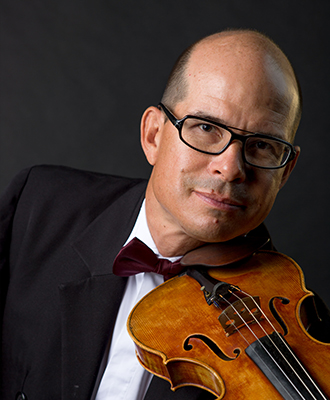 Renowned for his phenomenological approach to music, the French violinist Lyonel Schmit likes to  think about his work that it is more sounds than notes: Ouest France quoted “His rich and subtle sonority acts like a magic spell”.This deep and holistic approach started with obtaining the highest distinctions of the Conservatory of Paris in 1997, thanks to the meeting of Ivry Gitlis but especially of Michael Hentz, heir and close to Sergiu Celibidache until his death.

His fertile ground was shaped when he was a 7 year old boy in Metz, thanks to Patricia Reibaud and his mentor Nadezhda Beshkina (professor at the Tchaikovsky conservatory of Moscow).Later he went to the Conservatoire National Supérieur in Paris in the class of Devy Erlih, and achieved his cursus with the pre-PHD of Régis Pasquier.

Lyonel is also a laureate of the international competition T.Varga, R.Lipizer and young European soloists, where he won the gold medal. Besides he is supported by Foundations such as the Cziffra Foundation, Fondation de France, Fond instrumental français, Fondation Zilber …Curious and unclassifiable artist, he has been increasing the wealth of his experience with the symphonic repertoire since his earliest childhood.Invited for many years as concertmeister of various orchestras such as the Opéra de Marseille, the Orchestre National de Lyon, the Tasmanian Symphonic Orchestra, La Monnaie de Bruxelles, the Luxembourg Philharmonic Orchestra, he has been as well the concertmeister of the Luxembourg Chamber Orchestra since 2012.

Most recently, from September 2019, he has join the Qatar Philharmonic Orchestra as the 1st concertmeister position.An eclectic violinist, his repertoire ranges from chamber music to soloist repertoire, from contemporary music to electro-acoustic and tango with the encounter of Richard Galliano.He shared the stage with him around the world nearly two hundred times between 2004 and 2008.

Recording side, “The Rothschild violin” is obviously the project that characterizes the most his artistic approach.Listen urgently to the Fondamenta label !Lyonel Schmit plays a violin by Domenicus Busan, made in Venice around 1770, graciously loaned by the Ghasarossian company.