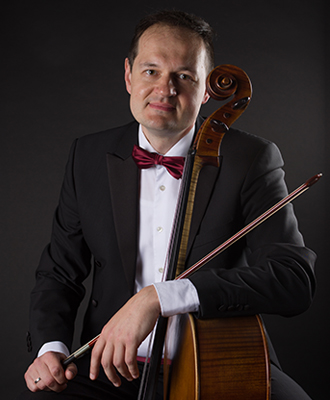 Cellist of the Qatar Philharmonic Orchestra, Anton Pavlovsky has been a veteran member at leading positions in many reputable orchestras in Russia such as the Russian National Orchestra, National Philharmonic of Russia, Svetlanov State Symphony, etc., appearing in major concert halls of Moscow, in Netherlands, Germany, UK, Switzerland, France, Belgium and Norway.

Anton Pavlovsky was born in 1985 in Ufa, Russia. He graduated from the Moscow Tchaikovsky Conservatory and completed his postgraduate studies under Natalia Shahovskaya. In addition, he had the privilege to work with such eminent artists such as Mstislav Rostropovich, Daniel Shafran, Mikhail Khomitser, David Geringas, Lluis Claret, and Eberhard Finke.

He appears frequently in recitals in Russia and throughout Europe, Asia and the post-Soviet Union states. His name has been featured on playbills of such major music festivals as Kronberg Cello Festival, Festival International de Colmar, “The Virtuosos of the Planet” (Kiev), and the Musical Olimpus Festival (Saint Petersburg). He has given master classes in many cities in Russia.

Anton Pavlovsky also earned his Master’s degree in opera and symphony conducting at the Gnessin’s Institute of Music under Vladimir Fedoseev. He studied conducting with Vladimir Ponkin and Valery Platonov, and has participated in a conducting master class with Teodor Currentzis.