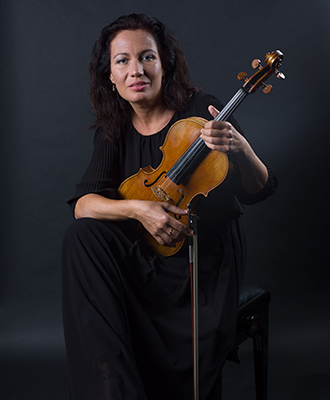 Anca Bold comes from a Romanian family with a musical background. Her father was a violinist and a member of “George Enescu” Philharmonic Orchestra of Bucharest, while her mother was teaching music and choir to young students.

Anca loves music and since an early age has been interested in composing while playing the piano and the violin. She went to the “George Enescu” Music School in Bucharest and later graduated from the Music Academy of Bucharest (University) adding, later on, a Master in chamber music.

She became a member of “G. Enescu” Philharmonic, getting to be her father’s colleague. But her real desire to travel and get to know different cultures is yet to be fulfilled. Anca first travelled to Brazil where she became a member of Orchestra Sinfonica do Estado de São Paulo (OSESP). Eager to try new things, Anca learned to play the viola and she loved everything about it. She then moved to Denmark as a viola player and became a member of Odense Symphony Orchestra, right in the city of Hans Christian Anderson, the Danish king of fairy tales.

After few years, a new challenge attracted Anca in auditioning for a brand new orchestra that was about to be founded in 2008 in Doha, Qatar. She was delighted to become a member of Qatar Philharmonic Orchestra and has been working as co-principal viola player ever since.

In the last few years, Anca has learned to play on an instrument called “theremin” – the first electronic instrument invented 100 years ago – which she played for the first time in a concert in Doha, Qatar, on December 13th, 2020.

Anca is married to the Romanian tenor Giorgio Martin.