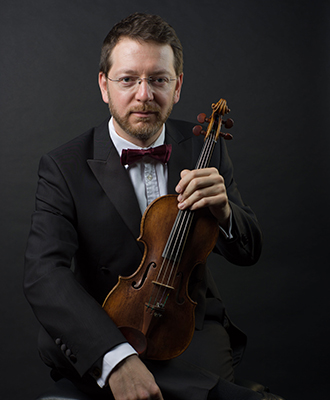 Dmitri Torchinsky was surrounded by music from a very early age. His father was the leader of the Moscow Bolshoi Theatre orchestra and his mother was a flute teacher. He started to play the violin at the age of 5 under careful guidance of the best teachers, curators of the Russian violin tradition.

At the age of 14 Torchinsky left Moscow and attended the Purcell School of Music and the Royal College of Music in London, as well as the Universität für Musik und darstellende Kunst in Vienna. Having won several violin competitions, he enjoyed a busy international career as a soloist, chamber and orchestral musician, before joining the Qatar Philharmonic Orchestra, and the faculty of the Qatar Music Academy.

Dmitri is a member of the Doha String Quartet which is a flexible music ensemble that is highly in demand in Qatar and further afield. As well as performing, Dmitri is much in demand as a successful teacher. His students have won numerous prizes all over the world. In what little free time he has left, he is busy with his three children.