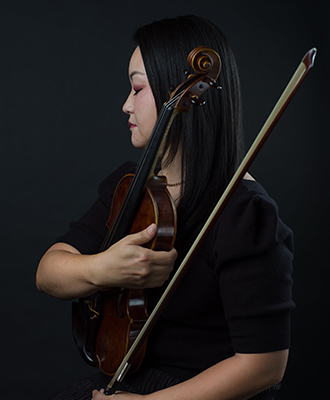 In 2004, Ruriko graduated from University of Osaka Soai with an Honors Bachelor’s degree as a scholarship student of Saito Foundation – Violin Music Faculty with Professor Machie Oguri, Professor M. Kishibe, and Professor R. Tanabe. In addition, she has studied Baroque violin with Mr. Yuichi Nakayama.

After graduating, Ruriko moved to Vienna, Austria and studied at the University of Music and Performing Arts as an Instrumental specialist violin student with Professor Edward Zienkowski, under a scholarship of Matsumoto-Doi Ailin Foundation. She graduated in 2007 with honors the 2nd Diploma.

Ruriko is a member of Qatar Philharmonic Orchestra since 2008, Co principal 2nd violins. She has won the 3rd Prize at the Mainichi Music Competition for Students 1998 in Osaka. The Prize-winner at the International Music Competition 2000 in Kobe.

In 2007, during her study in Vienna, by the recommendation of Professor M. Ahluwalia-Fernandes, Ruriko had a Piano-trio concert in Bösendorfer-Saal, as well performed with Anton von Webern orchestra with Maestro Pierre Boulez in Musikverin.

She was a participant of the Kyoto International Music Students Festival 2003, where she acted as a concert mistress for Festival Orchestra. Ruriko also participated in the Pacific Music Festival 2006 Orchestra Academy. There she had concerts with Maestro J. Kreizberg and Maestro V. Gergiev.