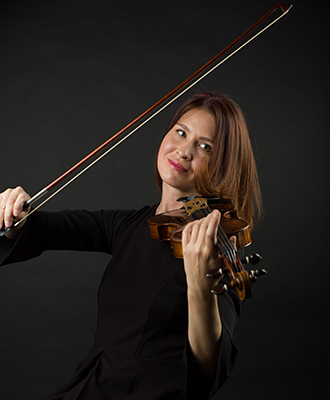 A first violin player. She has extensive experience of performing with Russiaʼs prominent orchestras. Mariya took her first serious steps towards her future career in the city of Togliatti. Having finished education at a local college of music she then moved to Saratov, another city on the banks of river Volga. 2004 saw Mariya on the move again, this time to Moscow. She not only entered the capitalʼs prestigious high school of music, but also received a grant from the Russian Performance Art Foundation. Mariya was principal of the second violins section with the foundationʼs orchestra. She graduated with a Masterʼs degree in 2007 and worked with a score of orchestras in the Russian capital.

In 2011, driven by the wish of sharing her knowledge and musical skills, Mariya started to teach students. Furthermore, she got a teacher position in Qatar Music Academy in 2020. 2016 found Mariya with new passion. She started developing her artistic skills and participated in art summer schools in St. Petersburg Academy of Arts (2017), Florence Academy of Art U.S. (2018), and Barcelona Academy of Art (2019.

Her new talent gave her the opportunity to be part of art projects with Qatar Philharmonic: “Ravel, Debussy and Joliet”, doing live-painting abstract works projected onto screen and accompanied by music of French composers (2019), and painting decorations for the project “Mozart, a Musical Sitcom” by Cinemoon Ensemble in Katara Opera House (2019).